Is Portuguese hard to learn?

Whether you find Portuguese hard or easy to learn lies in your confidence, motivation, and commitment. Any language can prove difficult to master if you're not learning it the right way, i.e., by taking private Portuguese lessons.

If you'll learn Portuguese, don't start with the mindset that achieving fluency is impossible. Although some people grasp new languages faster than others, learning Portuguese isn't rocket science. Also, remember that you can reach any level of fluency that you want as long as you're enthusiastic.

How Long Does It Take to Achieve Fluency in Portuguese?

In ranking the most difficult languages to learn, the US State Department states that Portuguese takes 24 weeks to learn. That's about 600 hours. Also, the report places Portuguese in the 'Category 1' of the ranking alongside Afrikaans, Spanish, Danish, Swedish, and French.

The category one status means that Portuguese is relatively easy to learn to fluency. An average learner can pick up the language and grow to speak fluently in just the space of six months. However, it depends on a few factors, like your natural ability to learn a new language. Also, your enthusiasm to learn Portuguese with a tutor has a role to play in your learning journey. 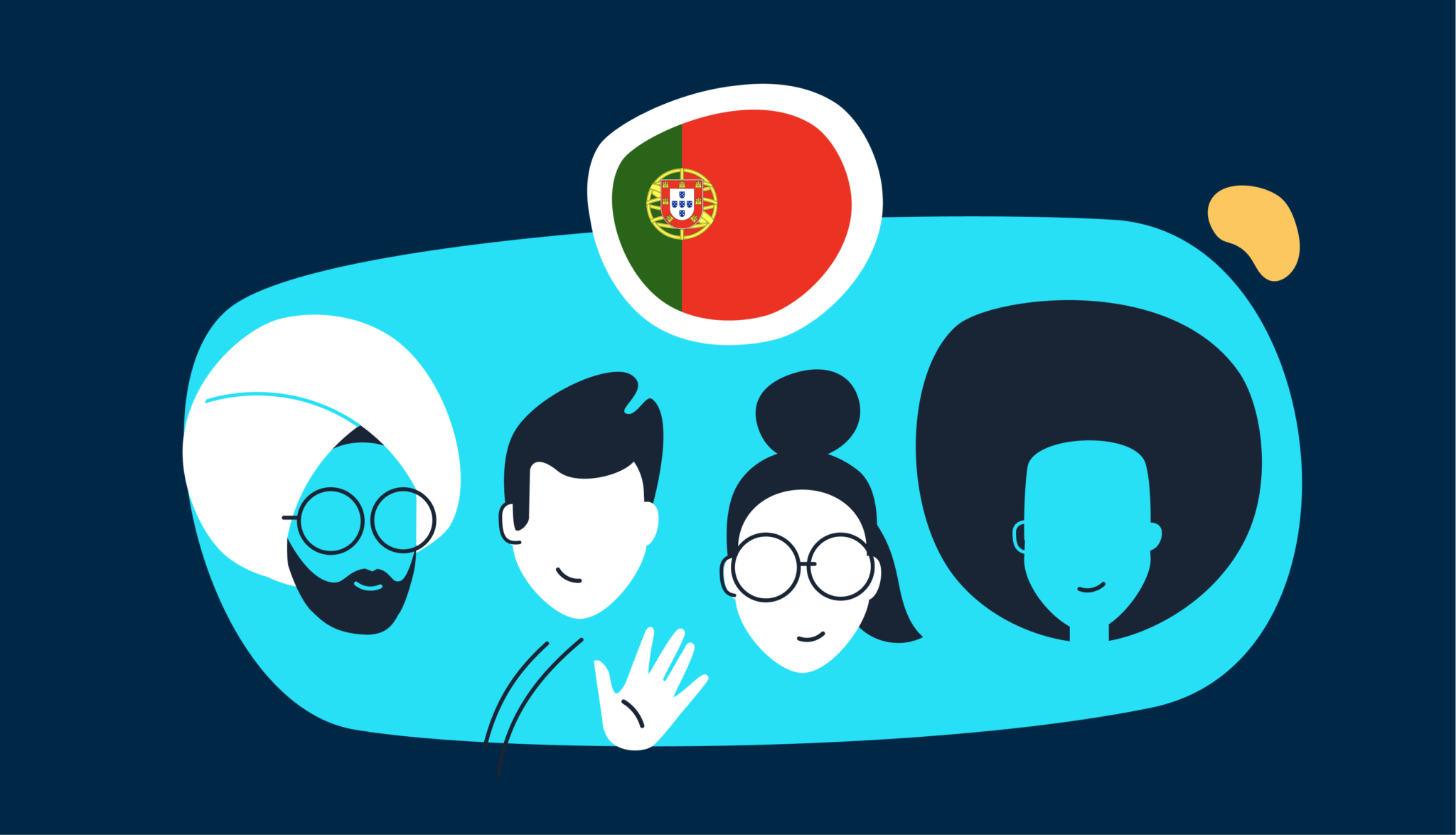 How Can I Learn Portuguese Fast?

Learning new languages can be challenging regardless if you're learning it online or taking an online language lesson. For example, some words in Portuguese with different meanings can pose problems when using and pronouncing them in conversations. However, to get rid of this problem, learn Portuguese with a private tutor.

When you learn a new language with a private tutor, you can practice conversations with your tutor. Also, if you live where Portuguese isn't commonly spoken, taking private Portuguese classes can serve as a partial immersion.

Below are fast ways to learn Portuguese and feel confident when having conversations in Portuguese.

Taking Portuguese lessons with a private Portuguese tutor is one of the fastest ways to learn Portuguese besides full immersion. Your private tutor will create a customized teaching plan to suit your needs. Also, you get to practice with your tutor and ask questions.

Learning apps are also a proven way to learn Portuguese fast. Many of the apps come with user-friendly features like daily lessons and artificial conversations that help improve your vocabulary. They also come with a daily reminder that alerts you when it's to learn. However, there are some drawbacks to using learning apps, like apps not providing tailored learning.

Additionally, most learning apps won't start teaching you large Portuguese vocabulary immediately. However, they will teach you how to learn by following some programmed instructions and examples. By this, we mean you will practice 'learning by doing.

It's good that you have decided to take Portuguese lessons. However, learning on your own can go a long way too. It will help you digest Portuguese words faster.

And what more exciting way to do it than from children's storybooks and textbooks?

As surprising as it seems, reading Portuguese children's books speeds up your learning. This is because your mind will be challenged just like a child, open to learning and questioning new things.

You can start with books that teach you to identify the Portuguese alphabet. Then you can move to those that teach you to identify and pronounce common things in the home and environment in Portuguese. Afterward, you can move to those that make syllables and morphemes. Finally to storybooks, Aventuras de Dona Redonda”( Adventures of Dona Redonda) by Virgínia de Castro E Almeida is an example of such books.

Use flashcards for words that are difficult to learn

When you learn Portuguese with a private tutor, you may find some words difficult. When this happens, you're not alone. Several millions of people have experienced the same. Luckily, flashcards have proven to be able to work in this instance.

Write the words on your sticky notes, then paste them where you can wake up to see them every day. You can write as many as 15 words that are giving you problems. Before long, you will notice that they no longer give you problems. You can then remove those whose problems you've solved and replace them with new difficult words.

Listening to CDs, DVDs, and Portuguese voice recordings is an effective way to learn Portuguese fast. It makes you learn on the go. Wherever you are, in your car, on your bike, with your phone or iPod and earphones, learning Portuguese becomes easy. You can also practice listening and reading together.

Watching DVDs and shows in Portuguese can also make you learn fast. Some subtitles can make you master tones only until you're good without them. This method can also help train your ears.

Engaging in interesting conversations with native speakers of the Portuguese language is another way to learn it fast. You can start by learning to say sorry, greet, and exchange pleasantries. Going to markets where Portuguese speakers dominate will give you a feel of the language tone, meaning, and culture.

Also, it will aid in developing the right tonal pitch and good accent of the language. Thankfully, people in the market are always ready to help, so asking them questions about difficult words is easy.

Speak Portuguese with yourself

There are times you will not be able to find someone to share your progress with by speaking. However, you can start to speak to yourself. Funny right? But you can give it a try. It works.

After your private Portuguese lessons, you can practice conversing in Portuguese with yourself. It'll help you store words and learn how to use them better. In addition, you can check for corrections from other places you learn from. If you're committed to doing this, you'll soon become a master of the language.

How Many People Speak Portuguese?

Portuguese is ranked ninth among the world's most spoken languages. In addition, it is ranked second among the Romance languages.

Interestingly, there are about 232 million native Portuguese speakers and over 26 million non-native speakers.

Besides Portugal and Brazil, speakers of the Portuguese language spread across the world. In the US, there are about 693,000 speakers. Likewise, Canada is home to 220,000. Other countries in the Americas also have native Portuguese speakers. Argentina has 58,000; Paraguay, 235,000; Venezuela, 254,000; Uruguay claims about 30,600 speakers.

In Europe, France has the largest number (behind Portugal), with 959,000 native speakers. Switzerland and Spain have about 200,000 speakers, while the United Kingdom has 135,000. These figures are more than enough reasons to learn Portuguese online.

How Many Countries Employ Portuguese as their Official Language?

Portuguese is the language of Portugal. This means that it is the national and first language of the people. Therefore, nearly all Portuguese residents speak this language.

Brazil is also a Portuguese-speaking nation. Interestingly, Brazil has the largest number of Portuguese speakers in the world.

In total, eight countries in the world employ Portuguese as their official language. Five of these are from Africa, with over 14 million speakers. The African countries include São Tomé and Príncipe, Angola, Mozambique, Guinea-Bissau, and Cape Verde. These countries in Africa are called PALOP (Países Africanos de Língua Oficial Portuguesa).

Generally, all these countries are called The Community of Portuguese Language Countries (CPCL). CPCL is an intergovernmental organization that ensures diplomatic cooperation among countries that employ Portuguese as their official language. Portuguese is also employed among Macau's Special Administrative Region's official languages in China.

Several organizations also employ or recognize Portuguese as one of their official languages. They include:

As learning new skills can help express your creativity, it can also help you discover a part of yourself you never knew. Learning to speak Portuguese is not exempt. Here are a few benefits of learning Portuguese.

There are limitless opportunities in the world we live in. These opportunities can come when we least expect them, and when they come, you should be ready. It may be a job or a university application in a Portuguese-speaking country. However, when you learn Portuguese beyond knowing how to read train tickets and road signs offers limitless connections with new people.

The tides of the economic connection of the world have and are changing more than ever.

Business organizations and companies are expanding in boundaries on an international scale. There are many viable market potentials in South America and Western Europe, and learning Portuguese makes you stay competitive in the global market. It also allows you to connect with several other Portuguese colleagues and investors in your field all over the world.

Helps to Improve Your Memory

Another good reason to learn Portuguese online is that it can improve your memory. Learning a new language means you'll know how the words are connected and the deep meaning of those words. You'll also have to learn to form Portuguese grammatical structures and speak and write them. All these challenging tasks put your brain muscles on an exercise and, in turn, improve your mental health.

What are the popular Portuguese Proficiency Tests?

The Centro de Avaliação de Português Língua Estrangeira (CAPLE), translated as Centre for Evaluation of Portuguese as a Foreign Language, is the only major Portuguese proficiency test. The test is organized by the Faculty of Letters at the University of Lisbon. If you register for this exam, you'll demonstrate your level of mastery of the language in different phases. You can write this either in Portugal or in 45 other nations.

There are five levels in the CAPLE exam, and they're as follows:

The A2 level is referred to as Certificado inicial de Português Língua estrangeira(CIPLE), meaning Initial Certificate of Portuguese Foreign Language.

Titled Diploma Intermédio de Português Língua estrangeira (DIPLE) and interpreted as Intermediate Diploma of Portuguese Language. You can prepare for your Portuguese proficiency test with a Portuguese tutor.

There are similarities between the exam levels of CAPLE and CEFR(Common European Framework of Reference for Languages).

You must reach a pass level of A2 or higher if you intend to secure Portuguese citizenship. Therefore it's important that you enroll in private Portuguese lessons.

To be eligible for CAPLE:

You must be at least 14 years old and above.

You must be from a country whose official language is not Portuguese.

If you do not satisfy the above, then you must meet the following:

Your primary communication language must not be Portuguese.

Your learned first language must not be Portuguese

Your parents' first language must not be Portuguese

You must not have had Portuguese as the language of study in your basic and secondary education.

How Can I Become a Portuguese Tutor at TUTOROO?

Becoming a Portuguese tutor at TUTOROO is super easy, whether for physical or online classes. While we don't particularly request certifications or qualifications to show your level of proficiency in Portuguese, our team will test your proficiency prior to onboarding you.

One unique benefit of being a tutor on TUTOROO is that your work schedule is flexible, and there's a steady flow of jobs as many people are signing up to learn Portuguese. Frequently asked questions about how to become a Tutor at TUTOROO may be found here.

Successful tutors at TUTOROO make as much as $8000 monthly only by being available to tutor. As a tutor, you can get full weekly schedules, and you also have the option of choosing when you'd be available. For instance, you can decide to take classes during the week and not on weekends.

To begin the journey of tutoring at TUTOROO, sign up here. You can expect to receive a message from you in about three working days.